A couple who spent 13 years trying for a child have welcomed a beautiful baby boy just in time for Christmas.

Carissa Morris, 33, and her boilermaker husband Dave, 32, who live in Wickham, Western Australia, welcomed their beautiful son Oliver on December 17 2021.

After a heartbreaking eight miscarriages and the stillbirth of Carissa’s daughter, they finally fell pregnant in April of this year, after only one round of ICSI IVF.

Oliver was born at St John of God Murdoch hospital at a healthy 6lb 7oz. 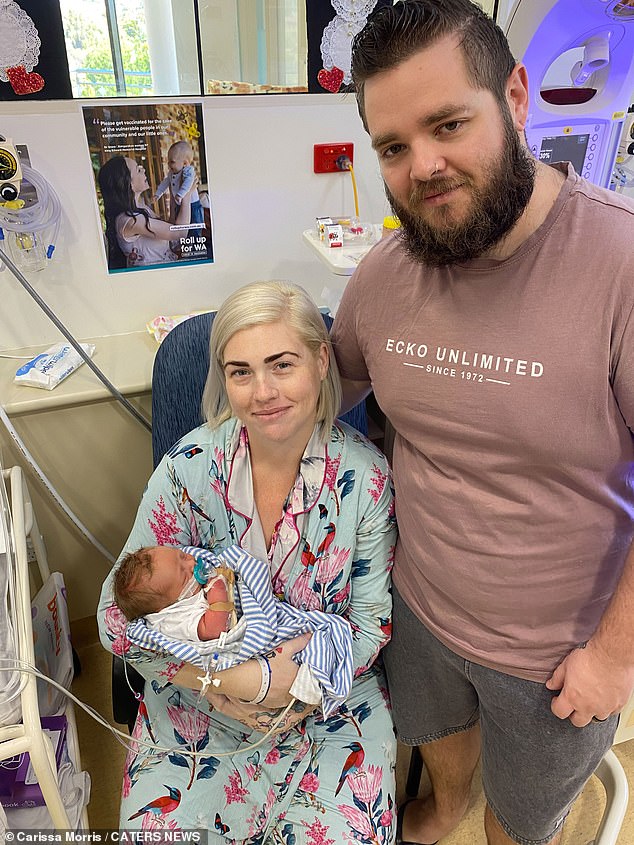 Carissa Morris, 33, and husband Dave, 32, who live in Wickham, Western Australia, have welcomed son Oliver (pictured) after 13 years spent trying for a baby

‘We tried for years and years naturally to have a baby, we did originally conceive quite a few times, but we just had multiple miscarriages and never got past six weeks,’ Carissa said.

‘We eventually had tests done and worked out that one of my tubes was blocked and the fluids were coming back into my uterus, and it was basically like poison.

‘I had my tube removed, and then we found out that we also had male factor fertility issues.’

Clarissa believes that the issues with Dave’s fertility could be linked to his work, although she did not specify what he does for a living.

‘There was an issue with my husband’s fertility, and we were told it was caused by his profession because too much heat can affect fertility in men,’ she said.

‘No one ever warned us, no one ever told us that excess heat would cause this.

‘We were then advised to go down the route of ICSI IVF where they insert the sperm directly into the embryo for the best chance of conceiving. 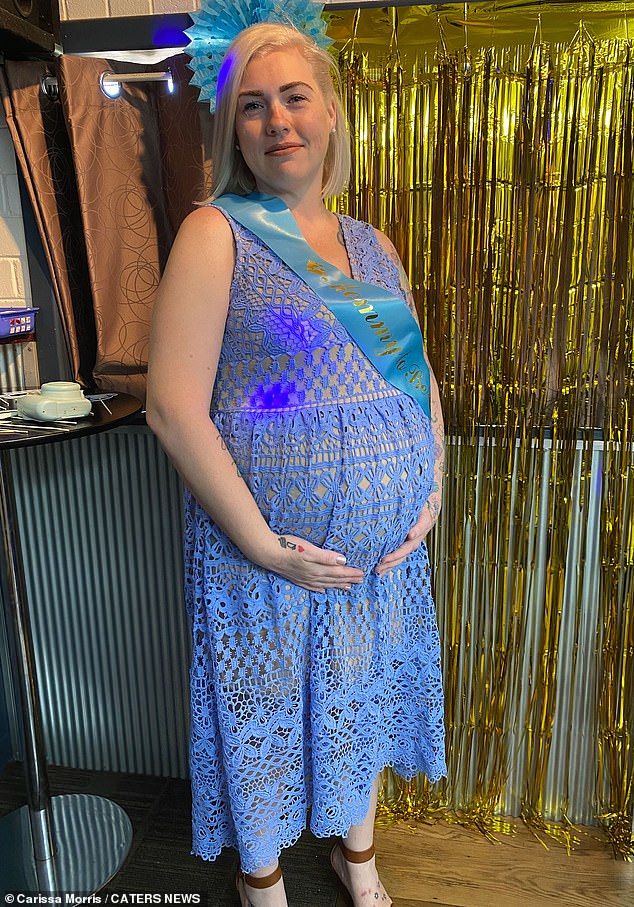 Carissa said it was ‘nothing short of a miracle’ that she was able to hold Oliver 30 minutes after he was born as initially he had to be intubated. Pictured: Carissa during her pregnancy

What is ICSI IVF?

In standard IVF, eggs are taken from a woman’s ovaries and mixed in a dish with her partner’s semen sample usually containing about 150,000 sperm.

One or two of these fertilised eggs, or embryos, are then implanted back into the uterus.

In ICSI a single sperm is injected directly into each egg using a fine glass needle.

The process helps couples hit by male infertility problems – for example, if the male partner has a low sperm count or damaged sperm.

It is slightly more successful than standard IVF, with about 30 per cent of treatments leading to pregnancy, as against 25 per cent.

‘We were really lucky; we did a full round of IVF and unfortunately, we didn’t have any embryos make it to freeze.

‘So, we just had our one embryo that we were able to have freshly transferred and two weeks later we found out we were pregnant.

‘When I found out I was pregnant it was probably the best feeling I had ever felt in the world, second to holding him for the first time.’

She said: ‘He was three weeks early and was born blue, his oxygen dropped to 20 per cent for nine minutes and he was then immediately intubated.

‘He was worked on by nurses and doctors for three hours to stabilise him.

‘Once he was stabilised, they had the NETS team, which is the Neonatal Emergency Transport Service, come in and pop him in their neonatal ambulance.

‘Prior to when he left, all I was able to do was touch his chin with my finger so the fact I was able to hold him in my arms 30 hours later was nothing short of a miracle.

‘Being able to hold Oliver for the first time was magical.

‘He definitely has everybody wrapped around his finger.’ 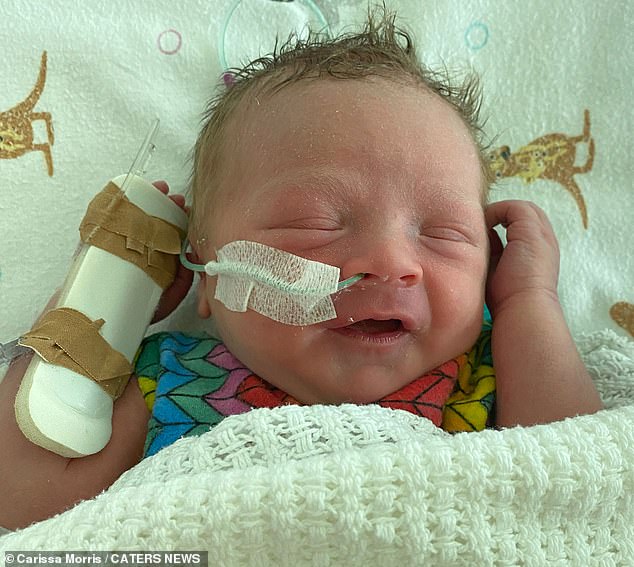 Carissa revealed she and Dave have planned to celebrate Christmas once Oliver (pictured), who is currently in the NICU, comes out of hospital

Carissa continued: ‘He is currently being fed 45ml per feed through a nasal gastric tube as he doesn’t have a suck reflux currently.

‘He started with a gastric tube because they thought that he had an obstruction in his stomach and may have needed surgery.

‘We’ve had scans done and he doesn’t have that which is great but as a necessity to make sure that he doesn’t lose weight he will be gastric tube fed.

‘We’ll be spending Christmas day with him in the NICU, we’ll be celebrating Christmas once he comes out of hospital, and we’ll give him all his presents.

‘We were really hoping he’d be out before Christmas but it’s not to be and we know he’s in the best place possible to get the care he needs.

‘It was just the miracle of knowing that it had worked, it had actually worked for us.’