Frankie Bridge has revealed that she considered carrying a baby for her sister, Victoria ‘Tor’ Cook, when she was trying to conceive.

The former Saturdays star, 33, candidly admitted on Friday’s Loose Women she would find it ‘really difficult’ as she ‘would always feel a part of that child was mine’.

Frankie said: ‘I know when my sister was struggling to conceive, we kind of had that conversation of like, would I feel comfortable having a baby for her.’ 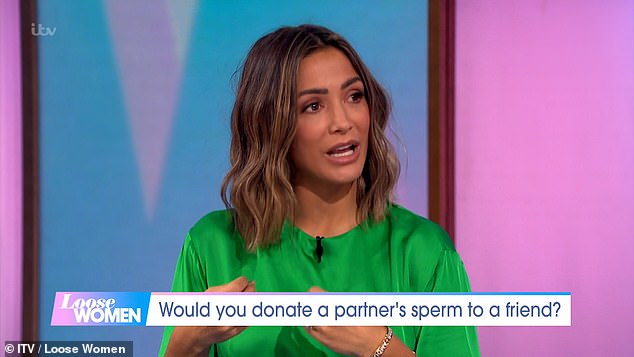 Candid: Frankie Bridge revealed on Friday’s Loose Women that she discussed carrying a baby for her sister, Victoria Cook, when she was trying to conceive

She continued: ‘I think it would of been my egg, I don’t know, maybe her egg, either way, I actually said to her I think I would find it very difficult to carry a baby and give it away.’

The beauty cut a stylish figure in a bright green satin blouse for the appearance, which she styled with a royal blue skirt for the show. 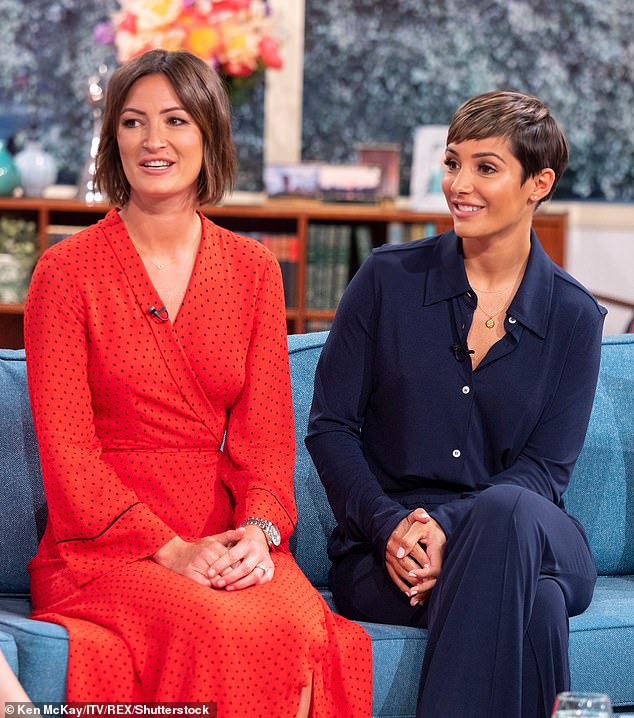 Opening up: The former Saturdays star, 33, candidly admitted that she would find it ‘really difficult’ as she ‘would always feel a part of that child was mine’ (pictured with Victoria aka Tor) 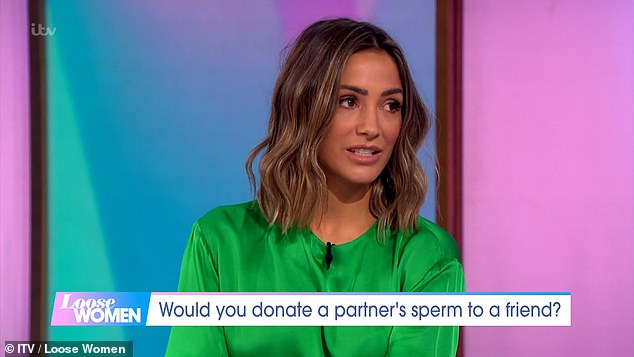 She continued: ‘I think it would of been my egg, I don’t know, maybe her egg, either way, I actually said to her I think I would find it very difficult to carry a baby and give it away’

In May 2021, Tor detailed her heartbreaking fertility battle after previously suffering four miscarriages.

Appearing on Loose Women via video link from her home in Bermuda, Tor discussed her tough road to parenthood amid her numerous losses, explaining how she and her husband James thought the miscarriages were ‘normal’.

The blogger, who has since welcomed twin boys, also opened up about the NHS’ current policy where they don’t look into fertility issues until a woman has had three miscarriages.

Speaking to the panel, which included her sister, Tor said of her fertility struggles: ‘We got married in 2017 and then obviously did the normal thing of get married and have babies straight after and it didn’t quite work out that way. 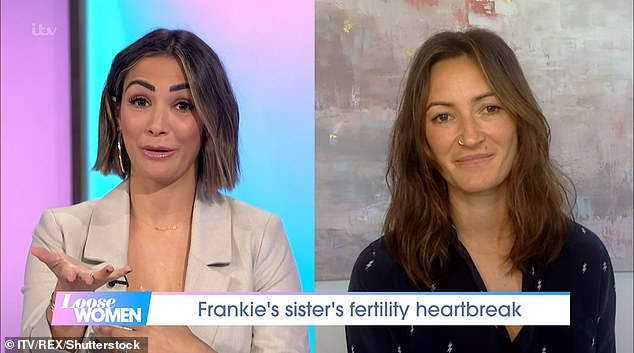 Heartbreaking: In May last year, Tor opened up on her heartbreaking fertility battle after previously suffering with four miscarriages

‘We fell pregnant quite quickly, luckily that was something I could do. In October we found out we were pregnant first time, it was quite early miscarriage with that pregnancy, Obviously you know you’ve heard people having miscarriages not overly talked about.

‘Obviously with this whole don’t do anything until you’ve had three. The first one, I was like “oh it’s horrible, but it happens to people, so we will see what happens”. But then next time it happened and then next time… I don’t think at first we thought there was a problem, we thought it was normal, which is quite sad really.’

Going on to further discuss the issue of the NHS not looking into miscarriages until three has been had, she went on: ‘It’s something I’m working on with Tommy’s charity, to stop that, they don’t look into it on NHS until three miscarriages… it happens in a lot of countries as well. 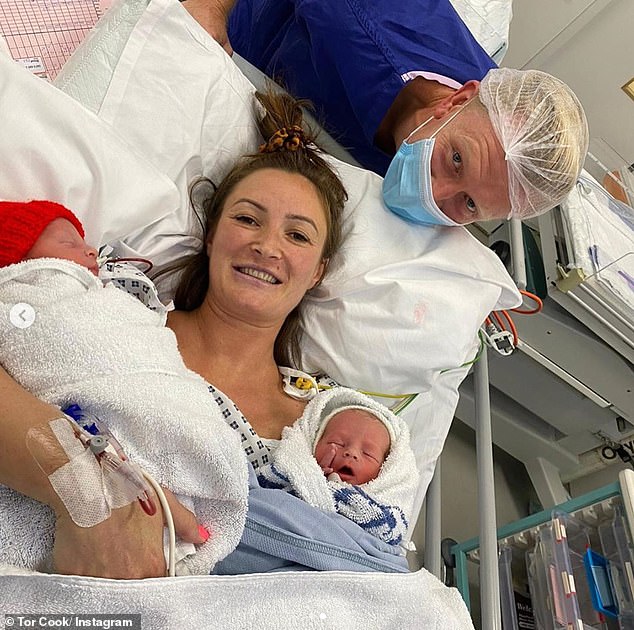 Sweet: The mother-of-two shared a snap of herself holding Sonny and Rafferty in a hospital bed next to husband James

‘Because they are so common and your body does so many different things, they won’t look into it till three miscarriages. And actually, one is bad enough, and the impact it has on you mentally and physically… we’re trying to stop that and hopefully look into it if you’ve just had one.’

During the interview, Tor also discussed how their losses had affected her husband James, explaining how her sister Frankie made sure he was OK.

She said: ‘The thing is, people forget about men as well. He just hated that it was me and my body that was going through it.

‘Obviously mentally he tried to stay strong for us, he was sad, we tried not to blame ourselves, which I know really easy to say. He wanted to take my pain away, the physical pain that I was going through. 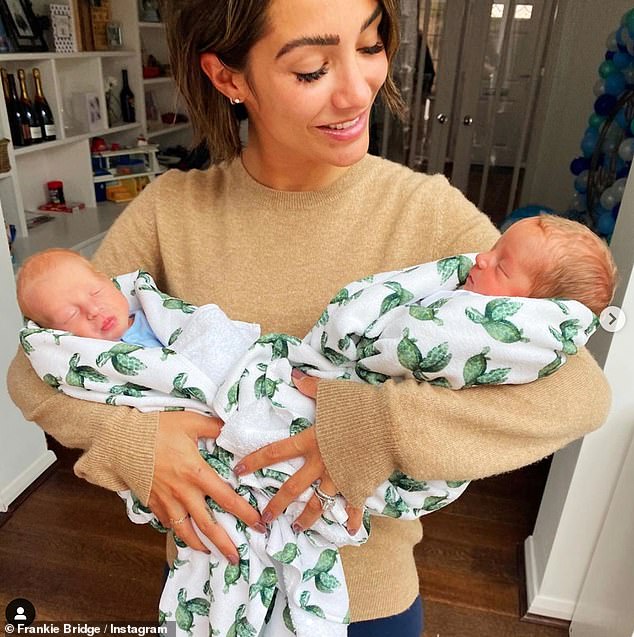 Auntie Frankie! Frankie shared a snap with her nephews shortly after their birth

‘Frankie was good checking in with him and making sure that we didn’t forget about him.’

At which the singer quipped: ‘We love James, he’s a good egg!’

Tor announced the arrival of her twin babies in a sweet Instagram in October, after giving birth the previous week.

The mother-of-two shared a snap of Sonny and Rafferty lay next to each other as well as a snap of herself holding them in a hospital bed next to husband James. 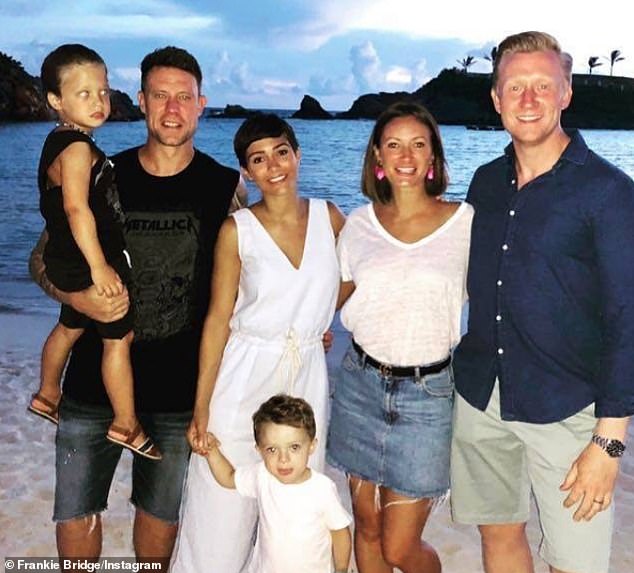