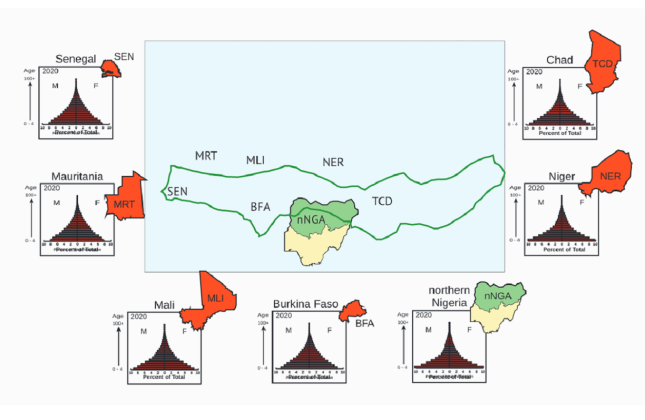 The countries of the Western Sahel find themselves in the tightening grip of a set of mutually reinforcing crises. These include deepening seasonal food insecurity and surges of food-aid dependency, widening income inequalities, widespread childhood stunting, low levels of education attainment and pervasive unemployment, as well as acute political instability and a rapidly growing Islamist-led insurgency that has already displaced some 2.5 million people across the region. In our recent report, What Future for the Western Sahel? The Region’s Demography and Its Implications by 2045, (published by the Atlantic Council’s Scowcroft Center for Strategy and Security), we argue that, unless the Sahelian states focus on reversing the underlying conditions that sustain high fertility—the cause of a persistently youthful and rapidly growing population—they will likely not be able to resolve these crises in the foreseeable future.

With but a few exceptions, the political elites in the Western Sahel seem unmoved to address, or even discuss, the drivers of sustained high fertility. In the region, these include forced early marriage of girls and high rates of adolescent childbearing; a very limited degree of educational opportunity and autonomy among women; large desired-family sizes coupled with short birth intervals; and limited access to, and knowledge of, modern contraception. Without a focused effort to reverse these drivers, the Western Sahel risks drifting to a tipping point—a moment Afghanistan encountered in 2021, and Somalia in 1993—when European governments, the United States, and key international and regional organizations abandoned their commitments, opting instead to contain spillovers of political violence, criminal activity, and out-migration at the regional frontiers.

Figure 1. The six Western Sahel states (in red) along the path of age-structural transitions, 2020 (Note the positions of Somalia and Afghanistan.) 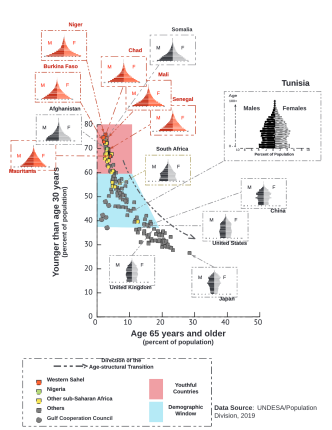 We found that as a group, the states of the Western Sahel remain stalled in the youthful phase of the age-structural transition (often called a “youth bulge”). This phase (in Fig. 1, shown as a red-shaded area) has, over the past 50 years, consistently generated the highest concentrations of countries in civil conflict; the least effective governments; the most unstable liberal democracies; the lowest per-capita incomes; and the lowest levels of educational attainment, child survival, and maternal survival.

To leave the youthful phase, governments in the Western Sahel will need to promote policies and programs to change traditional patterns of childbearing. Ideally, over the coming decades, countries would see a decline in total fertility rates from present levels between 4.5 and 7.0 children per woman, to about 2.8 or below (Fig. 2). Such declines in fertility would reshape these countries’ population profiles, elevate their median age, and—beginning at a median age of about 26 years—advance their populations into the next segment of the age-structural transition: a segment that the UN Population Division has called “the demographic window.” 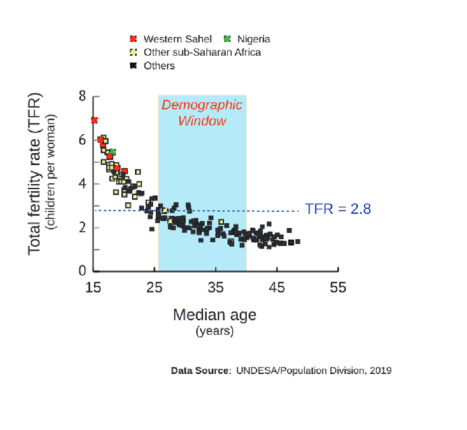 In contrast to the countries of the Western Sahel that skew young, age structures in the demographic window typically bulge among cohorts of adults in their most productive—and most taxable—years, while shrinking among childhood and adolescent cohorts. As a result, the number of children eligible for schooling levels off, demand for maternal and child healthcare eases, parental and state support for children rises, and—perhaps most importantly—the number of young adults, vying for jobs and status, slows to levels more consistent with the economy’s capacity to generate employment.

Statistically, this shift appears to “set the timing” of development. Within the window, developing countries have generally attained the World Bank’s upper-middle income class and reached similarly elevated levels of child survival (less than 25 deaths of children younger than 5 years per 1,000 births) and educational attainment (late-secondary levels of educational attainment among at least 60 percent of residents, ages 20 to 29 years).

The demographic window is also where we see increasing government effectiveness, greater political stability (Fig. 3), and instances of political development. Recent research suggests that civil conflicts—whether revolutionary or separatist—are unlikely to begin within the demographic window. In fact, persistent and intermittent episodes of these intra-state conflicts are increasingly likely to weaken or end as populations advance through the window.

Figure 3.  Trends in (a.) government effectiveness and (b.) political stability as median age increases, 2018 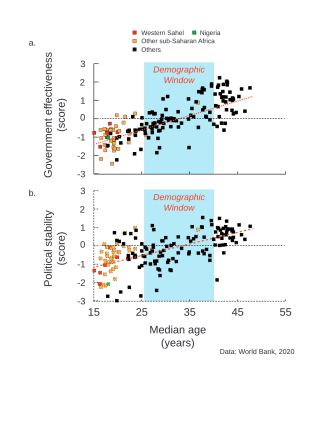 Despite the desire for large family sizes that persists in much of the Sahel, public health analysts in the region generally argue that—with added male involvement, greater support from local religious and community leaders, and increased attention from Sahelian governments and funding from donors—the basic strategies that have already been effective elsewhere in Africa are most likely to change Sahelian childbearing patterns. They involve implementing policies (some of which are already laws) and expanding programs that:

The combined effects of high levels of both girls’ educational attainment and the work of voluntary family planning programs have already increased modern contraceptive use in sub-Saharan Africa (Figure 4, updated from Bongaarts & Hardee, African Journal of Reproductive Health, 2019). However, in the Western Sahel, relatively low levels of female educational attainment are accompanied by moderate or weak family planning programs.

The international development community has noticed these widening gaps, separating the Western Sahel, coastal West Africa, and central Africa from achievements in eastern and southern Africa. To help family planning organizations plan, implement, and track activities, the Ouagadougou Partnership was founded a decade ago to link francophone West African governments, including those in the Sahel, with African public health professionals, civil society organizations, and international public health donors. Until the Ouagadougou Partnership was created, even France, the region’s principal education and economic development donor, had never before provided direct assistance to programs in sexual and reproductive health (SRH). Over the past decade, France has become the region’s second-largest SRH donor. 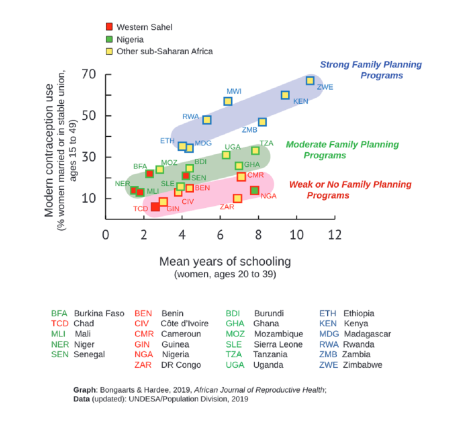 Our report acknowledges the difficult demographic future that awaits the countries of the Western Sahel. Due to age-structural momentum (growth generated by a population’s distribution, often called population momentum), UN demographers expect the region’s population to double by 2045, even under the Population Division’s optimistic low-fertility scenario. By then, urban residents will likely make up nearly 50 percent of the Sahel’s population, and most will live out their lives within the region’s sprawling million-resident-plus cities and rapidly growing towns.

While imposing greater demands on infrastructure, rapid urbanization will no doubt generate opportunities for higher educational enrollments, more efficient service delivery, job growth, and—if girls’ educational levels rise and women can access contraception and employment—substantial urban fertility decline. Although the future effects of climate change and conflict are uncertain, the doubling of out-migrants from the region by 2045 would be consistent with recent migration trends in low-income countries.

Demographic models suggest that intra-state conflict in the Sahel is unlikely to abate during this period. Until these states enter the demographic window, defense analysts should expect ongoing conflicts in the region to continue to drive food insecurity and displacement, and to disrupt development efforts—particularly those designed to improve conditions for women.

Given the difficult economic and security environment, our report recommends that donor agencies consider focusing principally on two countries in the Western Sahel—one coastal, one landlocked—that offer the best chances for a reproductive turnaround. In other parts of the world, regional fertility transitions have typically begun in a single “bellwether country” before major programmatic efforts spread to regional neighbors. By focusing on Senegal and an inland Sahelian state (such as Burkina Faso), investments could produce a set of regional “lessons learned” and “best practices,” as well as a pool of qualified reproductive health professionals and women-centered organizations with enough regional influence to alter the future of the Western Sahel.

Richard Cincotta is a Global Fellow at the Wilson Center, and a Population Institute Senior Fellow.

Stephen Smith is Professor of the Practice of African and African American Studies at Duke University.